Solid State Logic (SSL) it is among the leader brands in the world of professional audio. Starting from UK in the early seventies, it has gained a strong reputation thanks to several consoles sold to the best studios all over the world. The first models (4000 series) were full analog and based on integrated operational amplifiers (by that time the competition made use of discrete op-amps such as the 2520 widely used on API devices, just to name one). 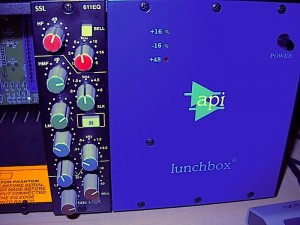 SSL mixer are also versatile and easily integrated with the rest of the studio equipment. Mix automation, parameter recall and DAW control, toghether with a clean analog path, have begun the company trademark explaining the reasond why SSL is such an importand brand. The company evolution never stopped in these decades. Digital systems as well as analog devices have been introduced in the market. Bus Compressor, X-Rack components, Duende platforms and native digital plugins are well known and widely used also because of the reasonable price.

Recently, following the market trends, a couple of components built according the API-500 standard have been launched. The first one is a compressor (611DYN) while the second, the object of this review, is an analog equalizer, the 611EQ.

A big Printed Circuit Bard (PCB) contains op-amps and passive components installed using SMD (Surface Mounted Device) technology. Functions and features are the same as the X-Rack model XR425. Settings recall it is, unfortunately, not available. Some design review has probably been implemented to move from the ±18V power supply voltages, typical of the X-Rack specs, to the ±16V available in the API Lunchbox.

The equalizer can be fully bypassed and a further button enables the Black option.

In th early ’80, the LF filter had brown knobs. The LMF and HMF filters were logarithmically simmetric (the bandwith, expressed in octaves, was constant no matter how the center frequency was tuned). In this dedsign, the LF and HF were single pole filter (6dB/Oct). The model was defined “02 EQ” but it has been nik-named Brown by the engineers due to the knob color.

The next design, called “242 EQ”, was developed in cooperation with George Martin. The maximum filter gain went from 16dB to 18 dB. This model was installed on AWS e Duality consoles and on the X-Rack modules. The sound of those equalizer was found to be more puncy and the devices was named after the LF knob’s colour. They were than called Black.

With the Black button (available on the panel) the two types of equalizer (Brown or Black) can be selected on the new 611EQ (the same feture is also available in the X-Rack modules).

There was no problem in installing the unit into the Lunchbox. The tests have been carried out using some tracks recorded with an Audio Technica 4040 mic and API 512C preamp (acoustic guitar), Neve 1073LB (electric guitar) and Focusrite ISA One (vocal track). Starting with Brown option, the response is smooth and musical. Almost impossible to set wrong combination, it is easy to let the track sit into the mix. With the Black option the unit becomes punchy and the sound in the high frequency spectrum stands out easily without being harsh.

The Brown mode sounds right with vocal tracks and electric guitars. The Black button helps the sound to be more in your face reserving much attention to high frequency details.

On drums bus (Brown option) low frequency spectrum can be put in evidence giving a tight bass and good body. Cymbals and ambience can pointed out with no effort. Bass tracks can be either full bodied and detail rich. With bass we have also tried to saturate the LF band to verify how the 611EQ works in adding harmonics. Even with a big distortion the sound came out usable and still musical.

The audio samples start without any equalization, the 611EQ is than inserted to let the listener appreciate the sound differences. No further processing is applied.

In our test the 611EQ revealed to be linear and subtle with Brown mode and slightly puncier with the Black option activated. It is easy to find the sweet spot and reveal the tracks details as well as the sound body. In any case, the original message is respected and the applied modifications seem to add the right amount of gain (or attenuation) to make things sound better. Even when purposely distorted (as with the bass track) the sound is usable for the genres where a distorted bass applies. It is very hard to find situations in which the 611EQ cannot be used. SSL was right when decided to go into the API-500 crowd. The big SSL consoles’ sound is probably something different (we are still missing gain, dynamics and sum stages) but the 611EQ is likely to hit the market in a positive way. It is versatile, easy to use and relatively cheap. The price (around 760€ street in Europe) it is lower than the similar proposals by other vendors. Good move SSL!

Trackback from your site.